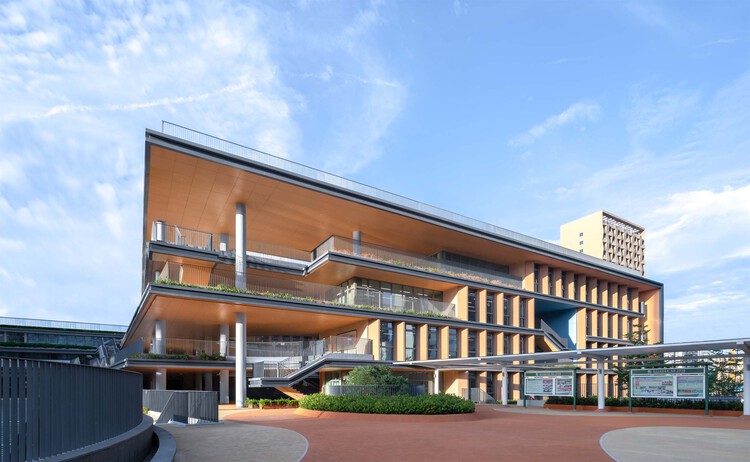 Project background: 102 classrooms, currently the largest nine-year school in Shenzhen. Shenzhen Foreign Language School Bao’an Campus, located in Bao’an District, Shenzhen, which is the development axis of the Guangdong-Hong Kong-Macao Greater Bay Area, is the first of four famous schools in Shenzhen introduced by the district. The project landing laid the foundation for the layout of “Shenzhen Foreign Language School in the North and Shenzhen Bao’an Middle School in the South”, easing the dilemma of resource shortage of prestigious schools .

The land used for the project is divided into two plots by a community road, which was originally planned as two adjacent and independent schools, which ran the potential danger of an uneven distribution of educational quality and resources. In order to realize the sharing of space, the interconnection of resources and the unification of school buildings and teaching standards, and people’s beautiful vision of promoting equity in education, the design has creatively proposed to merge the two plots into one school, creating an integrated campus of “one school with three campuses”. Through much communication and coordination, this strategy gained planning department approval to “transfer the upper and lower spaces of the community road by layers”, finally forming the largest coherent nine-year school in Shenzhen now, with a total of 102 classrooms and a super campus providing 4,740 learning quotas for the district.

Campus for resource sharing. Regarding the design, the strategy of “dual interconnection on the ground and underground” has been put forward to alleviate the traffic pressure around it. The second underground floor seamlessly connects the two underground plots, and a two-storey street platform connecting north and south is set up. Urban roads pass under the platform and do not affect each other. The original intention of the plan is to encourage teachers and students to spontaneously organize activities and exchanges so that the activities can be seen from the perspective of the city to create a unique vigor and vitality for the neighborhood.

Vertical campus: high-density, large-volume vertical extension. The design strategy hopes to drill in the vertical direction inside the cramped site, in order to achieve spatial diversification and maximize land advantages. Auxiliary functions of certain auditoriums, gymnasiums, specialized classrooms, etc. were designed to be underground which, in combination with a sunken courtyard and colored flooring, creates a soft open space boundary.

Dynamic campus: a dialogue between man and architecture. The heart of the courtyard design is the deduction of the prototype of the ancient theaters. By combining the podium and flag-raising platform with the exterior staircase design, the visual core of the courtyard is created and the speaker’s perspective interacts with the courtyard and the side corridor of the surrounding buildings, forming a super three-dimensional “theater”. The design allows the playground to creatively rid itself of the pure sporting attribute and form a complete activity space with centripetal quality and ritual feel.

Community campus: a civic school concerned with neighborhood relations. The design makes effective use of the transverse platform to provide a recreational space sheltered from the wind and rain for parents sending and collecting their children. The playground is placed at the junction of two roads, and the gymnasium and dormitory retreat to the city road to widen the view distance, which improves the crowded urban layout of the area. Multi-level continuous corridors, staggered staircases and layers of platforms form a facade expression that combines virtuality with reality, showing the community a cheerful and extroverted, welcoming and inclusive temperament.