I feel the grain of warm, fine sand in the soft spots between my toes. Curiously, a blurry image of the diced cross-section of the planet in elementary geography appears.

It shows the strata – from the layer of white sand massaging my toes to the burning core. There is an almost tangible feeling of connection with nature.

A breath of damp, salty wind hits right in the face. This breaks my reverie.

Koko regains my attention. Koko has a small, sharp knife in her right hand, bending with short strokes practiced on a green coconut. He’s in his mid-twenties, quite lanky with a few thick, brown locks on his head.

Koko dons stained combat shorts with a hemline miles above her visibly scarred knees. At his feet there is a pile of green coconuts – he sells Madafu – the overrated coconut water drink. He’s a career beach boy. He sells Madafu in low season.

I point to his feet. He is barefoot.

I ask, with a relaxed familiarity seemingly built over a long period of friendship. Bad. I’ve known him since the half hour I spent on the beach. He is not offended, as many people in the interior of the country would certainly be.

I await the response. Most people quickly follow up a joke about themselves with a redeeming retort. Koko has none.

I take my eyes off a shirtless man walking maybe a quarter mile into the ocean – his low tide – and look at Koko. A straight face – as you would have on a recitation of the Apostles’ Creed

I survived a shoeless phase back in our rural elementary school days, but – going through three decades of life without shoes? Hard to take that.

Koko’s feet – like most local guys passing by – were heavily webbed. Yes, like that of a duck.

See how your favorite (ugly) Crocs are web-like? They were meant for the beach. Not for the mall, and certainly not with socks.

I ask for a second Madafou. Coco is interesting. It’s better to look at an empty seabed. The low tide is disappointing. The joke comes easily.

To be honest, I hate the drink. For the taste, Madafu is neither here nor there – quite a grim affair. It’s neither sweet nor sour – oh wait – it tastes like a yucky version of ORS.

This strange-tasting mixture of salt and sugar used to treat diarrhea. No (yes) offense, Coasterians.

As if you were offering a glass of whiskey to a benevolent bartender in a new town, I offer Koko a glass of his own. He settles flat on the sand.

Koko is from Digo – one of the nine constituent sub-tribes of the Mijikenda. He was born and raised in Likoni. Storytelling comes naturally to this tribe. Perhaps, the trait that makes Coastal Kenya so attractive and welcoming.

Koko vividly recounts her youth, her entry into school. He would drop out in sixth grade, and not for lack of desire.

His father was a fairly successful fisherman and schooling was inexpensive. He just says – ‘the beach called’ – and, since Koko is on Shelly Beach. It’s barely a mile from Likoni Ferry.

Koko speaks English and Swahili very well, but he cannot or cannot write.

On the Swahili saying ‘Mugala muue na haki umpe’, he is fluent in German, French, Italian and a little Swiss. But, if humanity depended on them, Koko can’t read or write any of their syllables!

How does a man speak six of the world’s greatest languages ​​and lack the basic skills to write his own name?

I am now on my third Madafu. The taste grows on you – I guess the taste buds crumble, resigned to their fate.

“How did you learn all these languages? I ask Koko.

There is a distant look in his eyes. The tide is rising.

Koko is happily married to an age mate, a beautiful lady Digo.

Aside, in a conspiratorial tone – Koko blurts out that he’s been married three times already, as he says ‘in my younger years’.

To a German, a Frenchman and finally a Swiss – before the “cruel pandemic” interrupted the romance. They were ready to go to Switzerland, but the Covid 19 arrived.

Koko pulls a polythene-wrapped dog-eared pamphlet from her side pocket. It’s his passport.

Dear Lord, it’s colorful – marked end to end with arrivals and departures in cities around the world. If you have a travel bucket list, Koko has probably ticked off three quarters of it. 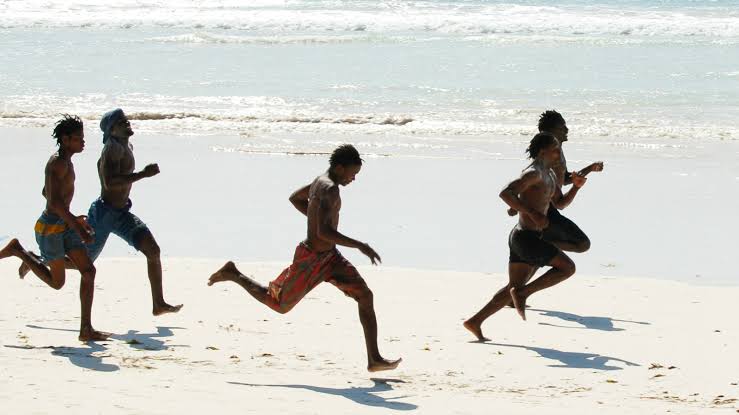 A group of young people during an exercise on a beach in Mombasa, Kenya (file image)

Well, imagine a leisurely stride through the cobbled streets of Munich – barefoot and webbed.

Suddenly my world felt so small. Sort of like a translucent lizard on the wall of the rental house in my servants quarters. I’ve always felt like a boastful snob when I say I live in Karen, Nairobi’s upscale neighborhood.

Beach boy peddling bland taste Madafu on Shelly Beach has been there, and definitely done that.

I will have to travel more. I started with small steps.

This year I couldn’t resist some amazing off-season travel plans as part of a deal between Magical Kenya, Jambojet and hotels on the Kenyan coast, Rift Valley and Lakeside region.

I did not see any dolphins, learn to surf, or attempt to drown with a snorkel during my two day stay. But I met Koko – who served up an unabashed juxtaposition to personal life ideals.